In the Run-Up to London Book Fair: Diversity in the UK Market

As the UK industry prepares for its annual encounter with colleagues from other markets, a look at UK book business diversity.

At the 2019 London Book Fair, the most recent in-person staging of the trade show. Image: LBF

Lotinga: ‘Absolutely No Room for Complacency’

Published a week ago today (April 1), the new “Diversity Survey of the [UK] Publishing Workforce” for 2021 from the association had the participation of 14,089 employees from 60 businesses. Several top-line observations are offered by the association CEO Stephen Lotinga and his staff.

And particularly as international trade visitors arrive in the UK for London Book Fair–just as the BBC reports that a record 4.9 million people have the coronavirus COVID-19 in the UK, no less–the findings of the association’s new survey should be interesting to everyone who has watched this market come together in an effort to change is stance on these crucial issues.

Who is working in world publishing and its national markets today? How readily do those people reflect the populations of the markets they serve? 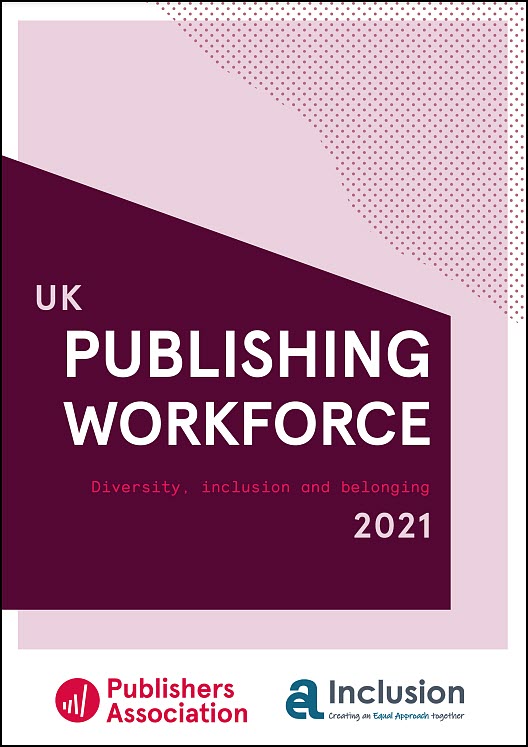 First, those key findings, as interpreted by the Publishers Association:

In a comment made on the release of the new survey data, Lotinga is quoted, saying, “It’s heartening to see that progress is being made in several areas. There are definitely some things to welcome and, crucially, some potential signs that the work that publishers have been doing to improve diversity, inclusion and belonging for staff is beginning to help move the dial.

“However, there is absolutely no room for complacency. In many areas, the pace of change is not enough. Socio-economic background continues to represent a major barrier to inclusion in our industry, as it does in many others. A lack of regional diversity remains stark.

“There is still much to be done and the Publishers Association [is] working with publishers and partners to plan the next phase of our inclusivity work and will share information about this later in the year.”

In considering these factors, it’s helpful to look at data on the wider population. Unfortunately, the latest census data for the UK is from 2011. The association notes that a new census was made in 2021 and that it expects to thus have an update on these factors later this year.

From that 2011 census, however, in England and Wales:

In Lotinga’s introductory comments for the report itself, he notes that the association’s “action plan” is reaching the end of its original term of survey activity. “We’re working with our members and industry partners to adjust our strategy to reflect evolving conversations, publisher activity, and best practice in this area,” he writes.

In further key findings of the survey, 93 percent of the respondents to the survey (over 87 percent in 2020) identified their national identity as at least one of the following:

One in six identified their national identity as being other than British or one of the “home nations.”

Working From Home, and Women’s Leadership

Among the most interesting COVID-19 era data from the survey is the fact that in the 2020 survey, 89 percent of respondents said they had the ability to work from home after the first lockdown, while before that, only 40 percent could work from home. In 2021, the Johnson government first lifted most spread-mitigation efforts in July, and then asked citizens to work from home where practical in December, creating a somewhat less clear picture, but with “almost two-fifths of respondents (38 percent) working from home around five days per week.

In gender issues, the World Bank sees 47 percent of the British workforce to be female, while 63 percent in UK publishing are women.

One of the most impressive elements of the UK’s analysis of its publishing industry is a finding that runs counter to the situation in many other markets: women continue to hold more than 50 percent of executive leadership positions in the UK and senior management roles, satisfying the Publishers Association’s goal of at least 50 percent.

More detail can be had in a download (PDF) of the 30-page report here.

And what’s important for trade visitors to London Book Fair to keep in mind is that the United Kingdom industry may not have all the answers or the progress it wants in issues of diversity, equity, or inclusivity, but it probably has taken a more forthright, persistent, and structured approach–including repeated survey and evaluation–than other book business markets of the world.

It’s an example worth examining and a lead worth following.

For your review, here’s our report from last year’s survey work in which women’s progress in leadership positions was becoming firmly evident.

More from Publishing Perspectives on issues of diversity and inclusivity in publishing is here, and more on the UK market is here.

More from us on the coronavirus COVID-19 pandemic and its impact on international book publishing is here.

Porter Anderson is a non-resident fellow of Trends Research & Advisory, and he has been named International Trade Press Journalist of the Year in London Book Fair’s International Excellence Awards. He is Editor-in-Chief of Publishing Perspectives. He formerly was Associate Editor for The FutureBook at London’s The Bookseller. Anderson was for more than a decade a senior producer and anchor with CNN.com, CNN International, and CNN USA. As an arts critic (National Critics Institute), he was with The Village Voice, the Dallas Times Herald, and the Tampa Tribune, now the Tampa Bay Times. He co-founded The Hot Sheet, a newsletter for authors, which now is owned and operated by Jane Friedman.

Why did dinosaurs go extinct while other animals survived?

U.S. Voting Systems Should — And Can — Better Reflect Diversity in…