Why Christians are losing the war against LGBT agenda

I am not a Roman Catholic, but I will begin this article with an excerpt from a Catholic Action League of Massachusetts email alert with which I stand in full solidarity:

“The recent call by the Bishop of Worcester, asking a Catholic school in his diocese to forgo symbols inconsistent with their Catholic identity, has now resulted in an intervention by a municipal agency. On April 3rd, Bishop Robert J. McManus issued a public statement questioning the display of homosexual pride flags and Black Lives Matter banners at Worcester’s Nativity School. … The Bishop asked, ‘Is the school committing itself to ideologies which are contrary to Catholic teaching? … As the Bishop of this diocese, I must teach that it is imperative that a Catholic School use imagery and symbols which are reflective of that school’s values and principles so as to be clear with young people who are being spiritually and morally formed for the future.'”

“The Bishop’s due diligence in trying to preserve the Catholic character of a Catholic school was met with a firestorm in the media, defiance from the school, criticism from the state Attorney General, unsolicited advice from the NAACP, and a petition at the Jesuit administered College of the Holy Cross denouncing him as ‘ignorant and bigoted.’ Now, a dispute between a Catholic bishop and a Catholic school has become an object of concern by a government entity. The Worcester Human Rights Commission … voted to ask the city to raise the homosexual pride flag at Worcester City Hall to support the school’s resistance to the bishop.”

This attack in Worcester is just one of hundreds of thousands of skirmishes taking place this year in states, cities, towns, libraries, workplaces and school boards across America – all of them triggered by homofascist aggression against traditional values, parental rights and common decency. Homofascism has taken over not just the LGBT movement itself, but Big Tech, Big Media, Big Business, the entire Democratic Party and the establishment (i.e., RINO) strata of the Republican Party. I am highlighting this particular battle because of its personal relevance to my own ministry and because it involves unprecedented direct warfare between the church and the state on internal church doctrine in a church school system. Mark my words, this battle is a harbinger of what’s to come everywhere across this land sooner than you think.

The email alert was forwarded to me by my long-time friend Hal Shurtleff, head of the superb patriotic youth training center Camp Constitution, who also happens to be the plaintiff in Shurtleff v. Boston. Monday the U.S. Supreme Court ruled in that case that the city of Boston violated the U.S. Constitution by forbidding the Christian flag from flying at City Hall when many other ideological and cultural flags had been allowed. Hal suggested in his email that a win at SCOTUS would mean that actions like that proposed by the Worcester Human Rights Commission would cease.

I respectfully but vehemently disagree. The LGBTs will NEVER cease their homofascism due to any court case. One need only remember the SCOTUS case of Boy Scouts of America v. Dale (2000). That case wasn’t just about equal access for Christian views in the public square, but about expressly blocking the “gay” agenda in the BSA, which won a slam-dunk ruling in its favor. And yet just 20 years later, the Boy Scouts have not only caved on “gay” Scouts, but on openly homosexual Scout leaders as well. And as of July 2022, a merit badge named “Citizenship in Society,” measured by proficiency “diversity, equity and inclusion” (wokeness), will be required to become an Eagle Scout.

The LGBTs never skipped a beat in their campaign to force the BSA into submission, and it mattered not who opposed them. I personally forced Bill Clinton on live television to say he did not agree with the LGBT pressure on the Boy Scouts – and virtually the entire nation backed the BSA in its policy. But, working at Obama’s direction, Bush’s secretary of defense, Robert Gates, and RINO Rex Tillerson orchestrated the BSA takedown from within. Homofascism rules among the elites. I invite you to read my article on this topic.

It happens that I campaigned from the very center of Worcester during my gubernatorial primary challenge to the gay-puffing RINO Charlie Baker in 2018. My third-floor corner apartment overlooked the Worcester Common to the south, and an historic (but unused) Catholic cathedral to the southwest. That gorgeous church was modeled on one of the entrances to the spectacular Notre Dame Cathedral in France and was truly an architectural and historic gem that captured the deep Catholic and Christian roots of Worcester. And for that reason, it had to go. I added my voice to the call for it to be spared, but our cries went unheeded. Over the course of the next several months I had a firsthand, unobstructed view of the systematic deconstruction of that cathedral, from the removal of the cross of Christ from the highest pinnacle on the very first day to the eventual wrecking-ball demolition of the ground-floor walls. It was, to me, the perfect metaphor for the deconstruction of the Christian cultural infrastructure of my home state and my nation. 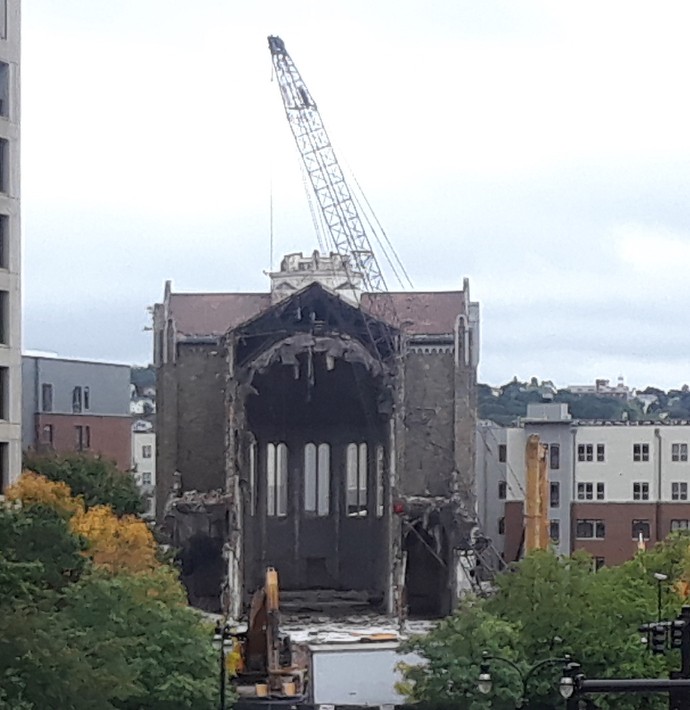 This week I will be in Oklahoma City, speaking out in several venues against the nationwide LGBT grooming operation in America’s public schools and explaining how we arrived at this season of sexual anarchy and moral chaos. For 30 years my life’s work has been exposing and opposing the LGBT agenda, history and tactics around the world. For 30 years I have watched the pro-family Christian side lose each successive battle, one after the other. The one we’re losing now is “transgender rights,” which is already morphing into “children’s sexual rights” (pedophilia).

Our defeat seems all but inevitable, because we always make the same mistake. We only fight the battle that’s right in front of us and give up on one we just lost. We never fight to take back ALL the ground back to the starting line. We only fight to hold the ground we’re on now. Usually we win, for a while – and then we quit because we have other things to do. Meanwhile, the LGBTs NEVER quit. They have had a vision of absolute cultural and political hegemony since the Stonewall Riots of June 28, 1969, and their eyes have ever been on that prize. That’s the anniversary of “Gay Pride Day,” by the way. Their flag of conquest flies over countless “Christian” churches now without any serious challenge, and their annual victory celebration lasts an entire nauseating month from coast to coast.

So if you are one of the remnant who actually want to WIN this war, stop compromising on the basics and get back to the only solid foundation. Sex belongs only in heterosexual, monogamous marriage, and every principality and power in our society that denies that truth must be dethroned. That’s the fundamental biblical truth the heroic Bishop McManus is championing. That is the true Christian doctrine that spans the entire spectrum of authentic Christianity. We should right now drop ALL of our doctrinal differences in the face of the LGBT threat before there’s nothing left of American Christendom but a pile of rubble.

If you are within driving distance of Oklahoma City, you are invited to attend the God’s Voice conference Details here.

Content created by the WND News Center is available for re-publication without charge to any eligible news publisher that can provide a large audience. For licensing opportunities of our original content, please contact licensing@wndnewscenter.org.

The post Why Christians are losing the war against LGBT agenda appeared first on WND.

Asian Students Excel Because Of Hard Work, Not Rich Parents

New Peanuts Special Has LGBT Message: ‘Some Kids Even Have 2 Moms’…